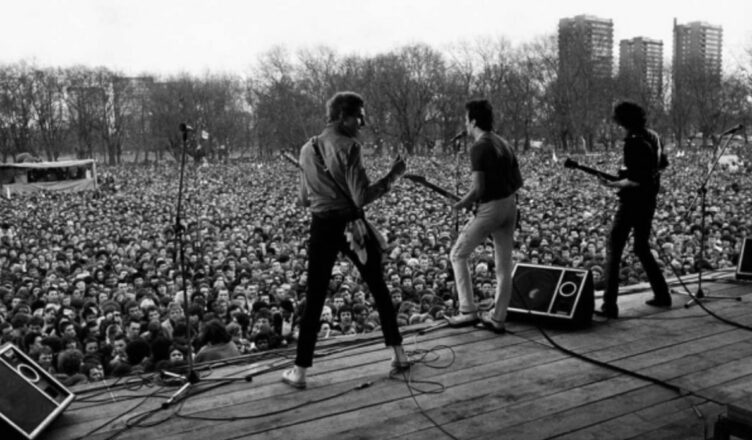 Music with a message: ‘White Riot’ reflects on fight against racism in 1970s Britain.

WHITE RIOT ***1/2 (81 minutes) MA
In the latest example of a historical film that says as much about things today as the era it examines comes White Riot, a slickly assembled documentary the serves as testament to the political and social power of pop music, and how it can affect change.

With a sharp eye for animation, director Rubika Shah blends contemporary interviews with a massive reel of archival footage that brings life to the nationwide 1970s Rock Against Racism movement in Britain that sought to thwart the rise of the National Front.

Racist to the core, the NF was a powerful, rapidly growing organization that pushed hard for a race-based immigration policy that would see many people returned to their country of origin, one way or the other. It found a friend in conservative politician Enoch Powell, who, in turn, had a friend in legendary musician Eric Clapton.

It was in response to the rise of such an unwelcoming mood that Rock Against Racism was formed to stage gigs and raise funds to battle the decay of Britain’s moral character.

With a beautifully ragged visual style reflecting the underground RAR publication Temporary Hoarding, Shah feverishly captures the high passions and physical clashes of the era that saw bands such as The Clash, Sham 69, the Tom Robinson Band and The Sex Pistols speak and sing out against the National Front, which also had a fanbase of young people and musicians.

Though it would have been great to include present-day chats with Clapton and John Lydon (aka Pistols frontman Johnny Rotten), White Riot is compact and comprehensive, edifying and enormously entertaining, full of great music, printed quotes, bad language and knockout footage from the period.

It’s all there: the violent protests; the newspaper cuttings; police behaving badly; and coverage of the legendary RAR/Anti-Nazi League gig at Victoria Park in the London district of Hackney, where more than 100,000 people gathered in the belly of National Front turf.

A terrific doco and a steaming hot slice of 1970s music history that issues a very clear clarion call about the unrest now unfurling across countries that should know better.

JAIMEN HUDSON: FROM SKY TO SEA ***1/2 (90 minutes) PG
After a motorcycle accident left him severely paralyzed, Jaimen Hudson readjusted his active lifestyle and became a hot wildlife cinematographer that made him internet famous and hungry to get back into the ocean he once spent so much time in.

A lovely dream, but much easier said than done as director Leighton De Barros reveals in a fairly confronting and unsweetened on-the-spot documentary that looks into the realities of living with a disability caused by an accident.

The wildlife cinematography is certainly impressive, as is Hudson’s determined mindset to hold on to the adventurous spirit of his lifestyle. Especially admirable is his eagerness to adjust to activities that maximize his skills and abilities, reprocessing his limitations as opportunities to try new things.

Jaimen Hudson’s story is inspiring, no question, and the film gained very intimate access into his life, which includes his relationship with his wife Jess and his quest to become a father, despite the extent of his injuries. The camera doesn’t cut when things get hard and Hudson finds it hard to speak.

Still, the real bread-and-butter of the film is not just Jaimen’s positive mindset, but those around him.

If nothing else, the film serves as a quietly powerful tribute to the carers, friends and family who form the support network that allows Jaimen to enjoy the life he openly acknowledges he is lucky to have.

It’s their love of him that really makes From Sea to Sky so remarkable, chiming in as one of the best films yet about people with disabilities, the challenges they face and those indispensable souls who enhance and enable what is possible.

Regally swathed in a succession of gorgeous outfits, Pfeiffer plays Frances Price, a formerly wealthy New York lady of leisure who is forced to move to Paris with her layabout son Malcolm (Lucas Hedges) before the money runs out.

Along for the ride is their smuggled moggie who possess singular powers, especially when it comes to contacting Price’s dead husband (Tracy Letts) through a dubious medium.

Adapted from the 2018 novel by Patrick DeWitt, who also wrote the screenplay, and proficiently, if unadventurously, directed by Azazel Jacobs, the film is the very definition of a star turn, an otherwise amiable ramble bejeweled by the performance of a player schooled in the art of owning a film – as she does here, with consummate ease.

Pfeiffer is now powering through her 60s and she’s still got it. No question.

THE GRIZZLIES **1/2 (102 minutes) M
As far as inspirational sports movies go – and there’s been a genre-load just in the past decade – The Grizzlies is corny, cliched and ham-fisted, yet it still manages to get under your guard with its heartfelt message about reigniting the spirit of despondent youth.

Based on a real story (though with some obvious dramatic license) and set in a frosted, uninviting location far from the buzz of urban life we meet ambitious young teacher Russ Shephard (Ben Schnetzer) who arrives in the remote settlement of Kugluktuk in far-northern Canada.

It’s a tiny, miserable place dotted with pre-fab buildings and surrounded by a desolate landscape seemingly designed to remind the town’s inhabitants just how far they are from the excitement and hustle of civilization.

Shephard’s plan is to do his time as a history teacher in the local high school before hopefully landing a position in an august institution.

Struggling to get his students to pay attention, or even turn up, it’s not long before he cottons on the huge problem the teenagers have with drinking, boredom and suicide. The lack of distraction and entertainment clearly leaves these kids feeling abandoned, sad and hopeless.

So, what to do? Start up a lacrosse team and let the magic of sport raise their collective spirits, bring the kids together and instill a sense of pride in their souls where despondency once dwelt.

Though based on fact, director Miranda de Pencier – whose work here earned a best director award by the Directors Guild of Canada in 2018 – does little to distinguish the film, which unspools as a compendium of sports-movie cliches, with melodramatic dialogue and acting.

Yes, the film deals with the issue of youth suicide but in a very brusque, predictable, movie-of-the-week manner that follows the well-worn formula.

Still, the thing actually begins to work on you through its strong sense of place, its insights into Inuit culture and its dogged persistence, which breaks down your natural resistance to platitudes through the sheer force of sincerity, which, for all its shortcomings, The Grizzlies has in spades.

One aspect of the film that needs addressing, as highlighted on the film’s Wikipedia page, is the issue of whether the film champions the “white saviour” cliche.

Elsewhere, having a white character arrive to save the souls of indigenous folk could warrant complaints about a lack of originality. But as is made clear in the closing credits of The Grizzlies, the main character upon whom the story is based was, well, white.

So where’s the problem? Should they have cast an actor of colour so the film would satisfy woke commentators? Wouldn’t that be distorting the truth to keep cool with the PC police?

That’s not the road you want to go down. Sure, the film could have been better directed but it certainly doesn’t push the “white saviour” concept the way the Australian film High Ground does.

And in the end it’s the message that matters and the positive difference the main character makes to the teenagers in the story. He cares about this forgotten community and wants to do something about it. What should his skin colour matter?