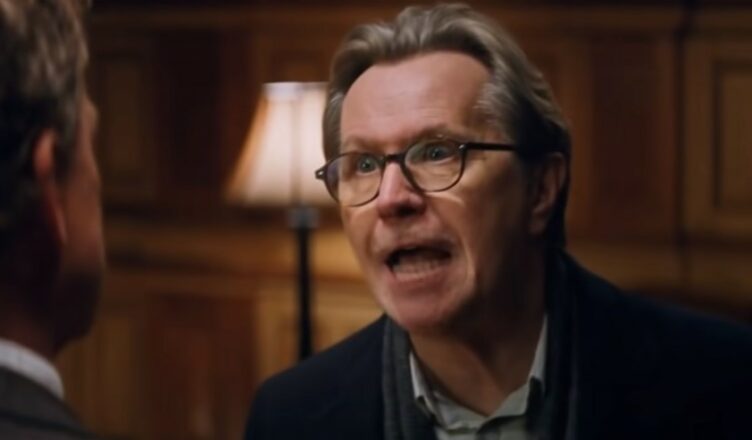 At the industry level we have some very excited executives about their hot new pain killer that claims to be as good as those that have come before it, but with the benefit of not being addictive.

Its release on the market is hugely anticipated not only for the good it will do, but for the cascades of money it will make. In the cool, impressively designed corporate headquarters, Jarecki subtly conveys how much the push for a return on investment drives the push to get a pill onto the market. It’s a prime cinematic illustration of cloaking the profit motive in the common good.

The only possible snag to the plan is the testing process, which Dr. Tyrone Brower (Gary Oldman, also a producer) is reluctantly having reservations about.

As a respected lecturer and figure in the field, he and his team have been doing plenty of lucrative business with Big Pharma, which has hosed plenty of funding into his university. The suits depending on Brower’s approval are not used to encountering setbacks, and have made it clear what would happen if they do.

At the other end of the spectrum is mother Claire Reimann (Evangeline Lilly) who, shocked by the demise of her son, sets about trying to track down the people responsible by following the supply chain.

In the middle is dedicated undercover DEA officer Jake Kelly (Armie Hammer) who is running a major sting operation on opioid suppliers, his chief problem being official pressure to hasten his efforts so he can make some quick arrests.

Reminiscent of the 2000 Steven Soderbergh film Traffic, based in turn on the 1989 British mini-series Traffik, Crisis effectively entwines the three stories to highlight the deleterious chain of cause and effect.

To his credit, Jarecki pulls off a demanding juggling act by keeping so many dramatic balls in the air and maintaining tension both within each story and between them.

As far as crime dramas go, Crisis is a captivating ride through a dangerous, morally murky world that poses some hard questions about whether it’s the criminals who commit the most heinous deeds.

The three leads are convincing, with Lilly standing out as the increasingly desperate, vengeful mother. Hammer continues to prove himself with his hard-nails portrait of a drug-hating cop while Oldman makes a meal of his role as the film’s most conflicted character.

Some of his dialogue might be a tad overwrought, but when it comes to making a Big Moral Point in the middle of a film full of heated, hot-button topics, few do it with such certitude. Perhaps Al Pacino could give Oldman a run for his money, and both are masters at wearing inner turmoil on their faces.

Footnote There has been some minor controversy over the reviews Crisis has attracted, and how they suddenly went from being positive to being mostly negative.

What is believed to have triggered the switch was the scandal involving Armie Hammer and the “cannibal fetish” sexts that were attributed to him, and which he has denied.

In the wake of their publication former girlfriends of Hammer spoke about his unusual sexual proclivities and have alleged abuse.

The general feel is that the wave of bad write-ups for Crisis aren’t so much reviews of the film, but of Armie Hammer’s alleged behaviour, with critics basically taking their moral disdain for him out on the film.

This is quite plausible, and is nothing new. After Crocodile Dundee, Paul Hogan made a perfectly good little comedy called Almost an Angel, which came out while the news was buzzing about how he had left his wife to be with his co-star Linda Kozlowski.

The reviews were brutal, possibly for the same reason.