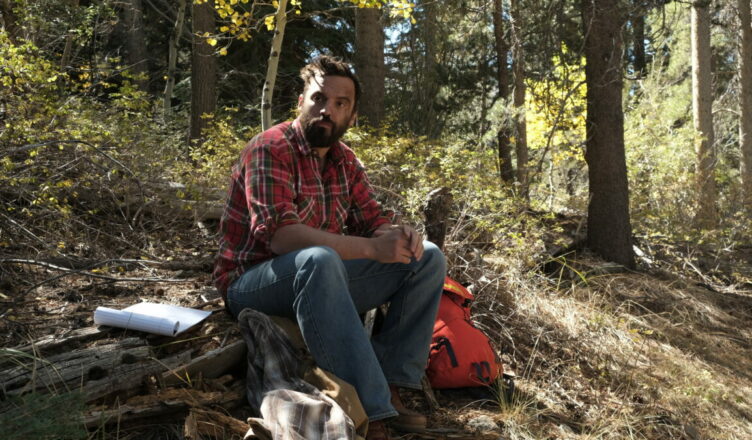 A man alone: Jake Johnson plays a man challenged by his mother’s will in ‘Ride the Eagle’.

RIDE THE EAGLE *** (89 minutes) M
The passing of a much-unloved mother kicks off an easy-going, undemanding comedy that plays with the idea death doesn’t necessarily mean it’s too late to reconnect with an estranged child who considered her dead long ago.

When the news hits musician Leif (Jake Johnson, who co-wrote the film with Australian director Trent O’Donnell) that Honey (Susan Sarandon), the weed-loving mum who abandoned him as a child, he admits quite openly to his beloved dog (a handy exposition device) that he feels nothing.

Rather than finally being free of her, Honey’s will states Leif can have her beautiful, wood-themed house in the equally gorgeous Yosemite National Park. The condition is that he must first complete a list of tasks, all designed to impart some much-delayed life lessons.

Once Leif arrives at the so-called cabin he receives his mother’s instructions via video and a series of carefully marked hand-written notes telling him where to go and what to do.

Light-hearted though it is, there are some annoying story weaknesses that taint the proceedings.

Honey’s video message is delivered on a VHS tape, which doesn’t actually make much sense given how she filmed herself with a (pretty nifty) digital camera.

Using a VHS tape would require her to load the video file onto a computer, then embark on the cumbersome, wholly unnecessary task of transferring the digital file onto a tape using a VHS player.

So, why the VHS tape? Why not leave him a USB stick, or simply point him to the computer she obviously has in the house, though it remains unseen. Or why not simply show her filming herself with an old VHS video camera? It’s an irritating flub.

Then there’s the lack of independent verification about whether Leif actually follows Honey’s instructions.

If nobody is checking to see whether he fulfills the conditions of the will, why would he bother? It robs the film of drive and motive. Shouldn’t there at least have been a lawyer on the other end of Leif’s mobile phone?

As for the mysterious figure who threatens Leif, first on the phone then with menacing visits during the night, it’s a bit of a MacGuffin that tries to inject some tension into the story. For such a breezy comedy, it feels forced.

Still, for all its vexing story flaws, Ride the Eagle has one major saving grace: it’s funny.

Thankfully Johnson, who is often the only person in the frame, has a wonderfully fizzy comic presence that compensates for the film’s shortfalls.

He’s a joy to watch and listen to as he works through his mother’s tasks, which involves some very amusing phone conversations with an ex-girlfriend.

On top of that, we get some lovely vistas of the scenic splendours of Yosemite – the mountains, lakes and woods, natural jewels that resemble paintings by Bob Ross.