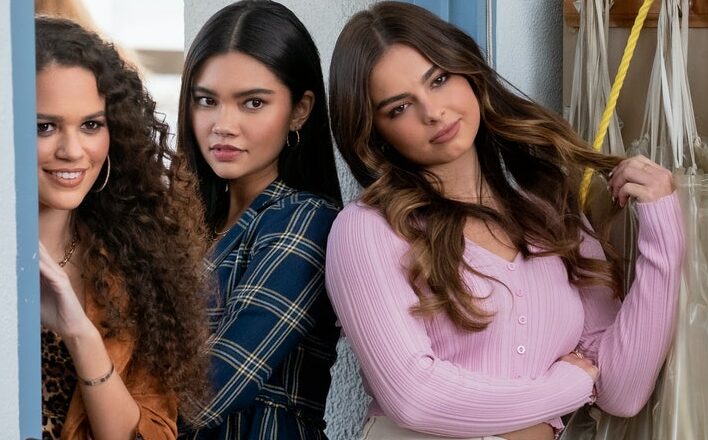 Up for a challenge: Madison Pettis (left) and Myra Molloy co-star with social media star Addison Rae in ‘He’s All That’.

Precisely why such an innocuous, cute, sufficiently funny, eminently disposable piece of teen fluff has attracted such derision is difficult to fathom.

He’s All That turns out to be a perfectly sweet flick that rehashes the basic premise of the original film, wherein a cool guy (Freddie Prinze Jr) is challenged to take a shy wallflower (Rachael Leigh Cook) and make her hot and popular.

Here, it’s hot-to-trot social media influencer Padgett Sawyer (Addison Rae) who is issued the dare, the aim being to win back the lucrative followers she lost after being humiliated online over a nose bubble she got when catching her hip-hop boyfriend Jordan (Peyton Meyer) cheating on her.

Though the film has been nimbly updated (by the original’s screenwriter R. Lee Fleming Jr., no less) for the digital generation, it replicates the same weakness that hobbled the first film, in that the person selected for the challenge is not all that challenging.

Instead of choosing the local dope dealer or the overweight, girl-shy science nerd – now that would have made a great movie! – Padgett, with the help of her equally pulchritudinous friends Alden (Madison Pettis) and Quinn (Myra Molloy), selects Cameron (Tanner Buchanan from Cobra Kai), a scruffy outsider.

Now, just as anybody with passable eyesight could see in the first film how lovely Rachael Leigh Cook was beneath her nerdy veneer, it’s immediately clear that Cameron is also quite attractive. He’s got wit, a strong personality and is so committed to his status as the school rebel that he indulges his love of photography with an old-school film camera instead of an iPhone.

So putting a bit of polish on him with a haircut and new duds isn’t all that big a makeover as Padgett styles him up for the prom.

Things get hairy as a rivalry kicks up between Padgett and Alden, who is determined to be crowned prom queen.

There’s also the driving issue of Padgett’s subterfuge and the growing conflict over how she presents herself online, who she really is and what she truly feels for Cameron.

It’s all nicely teased out by director Mark Waters, whose track record includes such notable films as Freaky Friday (also a remake) and Mean Girls. Both films starred Lindsay Lohan who would no doubt have done a wonderful job playing the lead in He’s All That, had it been made back when she was in her prime. (Was that mean? It wasn’t meant to be mean.)

Furnished with a pretty cast, Waters sustains a lightness of touch that keeps the romantic stuff from getting too mushy while also laying in a gentle dig at Gen Z vanity and the social media culture that makes it so easy for people to construct alternate online personas, then so hard to deal with the fallout when real life comes crashing in.

So, yeah. The film might be fluff, but it has a bit of substance. Well done, movie.

In her first film acting stint, Addison Rae does quite well; she’s no Alicia Silverstone from Clueless but acquits herself adequately alongside a host of snappy supporting performances, particularly Peyton Meyer as Padgett’s self-obsessed ex.

Chiming in with some nice cameos are the original’s Rachael Leigh Cook as Padgett’s hard-working mum and Matthew Lillard as the wise-cracking high school principal.

He’s a delight firing off the film’s funniest lines, the best being when addressing the device-obsessed teen crowd at the prom: “I know this is live-streaming, but if you put your phones down it’s actually happening right here in front of you.”

Lillard doesn’t quite steal the film, but he steals every scene he’s in, especially when he dances.

Try hard enough and you’ll probably find some deep meaning in the fact that Addison Rae, who plays a social media influencer, is one herself; she’s absolutely huge on TikTok and YouTube, has released a single, does modelling, etc.

It’s a no-brainer the producers signed her up with the hope her millions upon millions of followers would faithfully tune in and make the film a hit.

Still, beyond her marketing appeal, is it possible that Rae’s presence casts He’s All That as a lightly satirical cautionary tale about the perils of online culture?

Hmm…well, yeah. Why not? After all, there’s room for that alongside all the product placement (Pizza Hut; Kentucky Fried).

OK, He’s All That is no teen-movie classic but it’s also not the crime against humanity it has inexplicably been deemed to be.

As for why such a straightforward piece of innocuous, unassuming piece of rather likeable teen rom-com bubblegum would rouse such caustic critical barbs? Go figure.