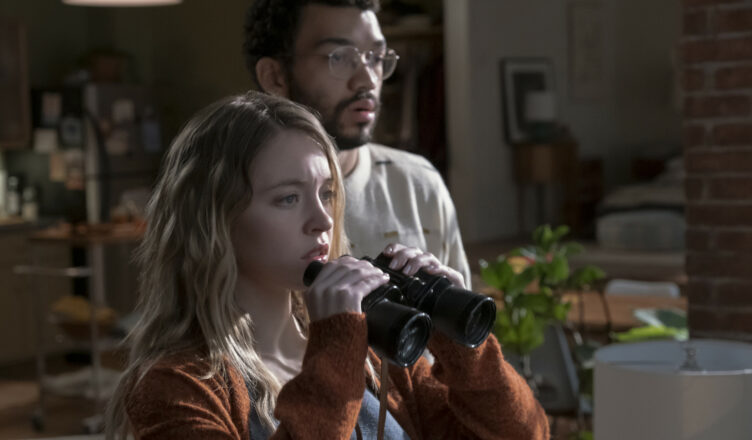 Only looking: Sydney Sweeney and Justice Smith star in and as ‘The Voyeurs’.

THE VOYEURS **** (116 minutes) R
Oh, what a tangled web we weave, when first we practice to peer into the apartment of the people next door and turn it into a hobby that gets more and more obsessive and more and more dangerous.

That’s the delicious central message of The Voyeurs, a tense, first-class, erotically charged mystery-thriller dreamt up by writer/director Michael Mohan.

Showing a sharp set of instincts about how best to galvanize a viewer’s attention, Mohan takes the essential elements of Alfred Hitchcock’s classic 1954 nail-biter Rear Window (written by frequent collaborator John Michael Hayes) and reshapes them into an increasingly compelling and decidedly twisted morality tale meticulously designed to keep you wondering what the heckfire is going to happen next.

Set in a swish high-rise precinct of Montreal, the trouble begins when hot young couple Pippa (Sydney Sweeney from The White Lotus) and Thomas (Justice Smith from Jurassic World II, Paper Towns) settle in to their spacious new digs.

They quickly discover that just across the way is a way hotter young couple, Seb (Ben Hardy from EastEnders) and Julia (Australian actress Natasha Liu Bordizzo from Hotel Mumbai), who like to leave the blinds up and the lights on whenever they’re getting it on, which Pippa and Thomas clearly see is a lot.

Heeding the prurient call of their darker angels, they set aside any serious discussion about the troubling moral questions of their behaviour and look upon their new favourite hobby as a way to spice up their own sex lives.

And, of course, they rationalize their conduct. After all, the brand of voyeurism they’re exercising is merely the result of two exhibitionists who want to be looked at. Besides, nobody is getting hurt as they watch and get aroused.

After figuring out an ingenious way to also listen in on the couple – it’s an important, carefully thought out scheme that has the desired effect of sucking you further into the story – it’s Pippa who starts getting carried away.

For her, spying is not enough. She wants to get into their neighbours’ lives. For Thomas, it’s a line too far and shouldn’t be crossed.

What unfolds is a wonderfully seductive tale of intrigue, full of twists and left turns that, in the best Hitchcock tradition, keeps you glued to the screen, waiting for the next scene to take you further into the hidden world that gives new meaning to the term “Neighbourhood Watch”.

Sweeney’s magnetic performance really draws you in, making you complicit in her actions as she soft steps ever deeper into the goings on across the way.

Vastly underrated, The Voyeurs turns out to be a knockout piece of entertainment for adults that plays with perversion and delivers a most satisfying finale.