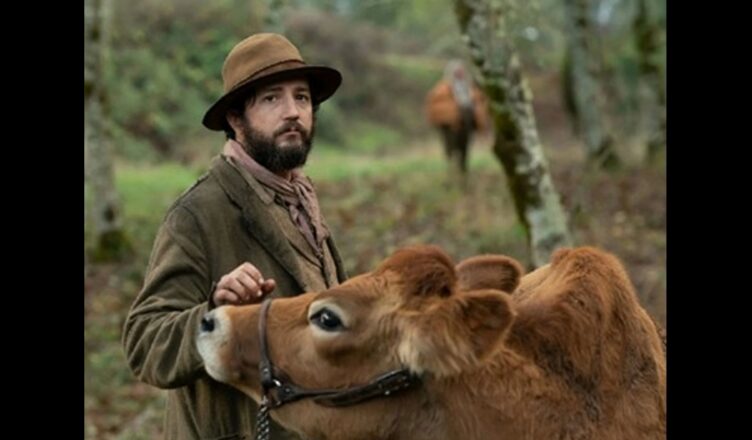 FIRST COW ***1/2 (121 minutes) M
Above its many other virtues, it can be said without fear of successful counter-argument that Kelly Reichardt’s First Cow is the best film you will ever see about the baking trade in 1820s Frontier America.

Set in the verdant tangle of a largely untamed wilderness in the north western state of Oregon (Reichardt’s locale of choice), Cookie (John Magaro), a put-upon cook working for a troupe of ill-tempered beaver trappers, happens upon King Lu (Orion Lee), a well-spoken Chinese gent he finds hiding naked from a gang of ill-tempered Russian trappers. Once they find King, they plan to do to him what they usually do to the beavers they hunt pelts for.

Proving himself a nice guy in a not-so-nice land of gruff, hard-talking hunters and traders (all of whom, by the way, seem to be somewhat ill-tempered) Cookie takes King to his modest little shambles of a shack and the two become friends and housemates.

A lover of slow pacing and minimal camera moves, Reichardt (Meek’s Cutoff, Old Joy, Wendy and Lucy) is in no hurry to get things moving in this muddy Frontier outpost. Testament to her style, the story’s singularly sedate inciting incident is the arrival of a cow.

The cow’s husband and child perished in transit so the cow is an especially valuable asset, being the only cow in the district.

For Cookie, the cow’s presence is especially fortuitous as the sudden availability of fresh milk allows him to flex some of his culinary skills, which in turn gets King quizzing him about his craft with an obvious agenda.

The homemaking couple soon hit upon the idea of making sweet biscuits and selling them at the local settlement where the novelty and nourishment of freshly baked goods would surely appeal to the treat-deprived denizens.

Cookie is a good baker, King is good at sales and a viable business model is born, earning them a tidy sum with each batch of baked goodies they take to the muddy market.

Their only problem is that the milk has to be carefully and quietly stolen at night from under the nose of the cow’s owner, Chief Factor (Toby Jones).

With King ensconced in a tree keeping a close eye on the nearby homestead as Cookie milks away, Reichardt uses quiet to build a remarkable degree of tension; as the two steal the milk Reichardt carefully positions in the darkened frame a single speck of distant light coming from the house – it’s a bedside candle that tells King the house is still and that they’re safe.

Inevitably things go south for the entrepreneurs, setting in train a splendidly directed chase through the brush and bracken that underscores how the theft is not some trivial misdemeanour but a crime that warrants brutal punishment.

Deftly, the film’s tone fades from being congenial with a tinge of frivolity to being downright deadly as Cookie and King realise, they are running – or, rather, stumbling – for their lives.

It’s another evocative, deceptively simple portrait of frontier life from Reichardt; working again with cinematographer Christopher Blauvelt (who has shot all her features) she makes the most of the academy (i.e square) format by framing her frail human figures against a wilderness that seems ever-ready to engulf them.

She’s got a love of filling her compositions with detail and nuance, then locking her shots to allow our eyes to wander about inside the frame. Watch, for instance, the delicate way Cookie applies honey to their biscuits, then hands them over to his customers.

Old-school cineastes who recall the subdued splendour of Swedish director Jan Troell’s Oscar-nominated films The Emigrants (1971; 191 minutes) and its sequel The New Land (1972; 202 minutes) will know the feel Reichardt is going for.

The lead performances from John Magaro and Orion Lee are wonderfully nuanced. With all the talk of toxic masculinity, it’s good to see a more humane portrayal of masculinity that is not only non-toxic but positively warm and heartening.

Indeed, First Cow is the latest film to celebrate male friendship. We saw it painted with huge brush strokes in such A-grade studio films as The Wolf of Wall Street, Ford v Ferrari and Once Upon a Time in Hollywood. And here it is again, writ smaller but just as potently.

It is, of course, gratifying that such an important aspect of men’s lives is so well served by cinema. Yet, it would be nice – would it not? – to see a few films dealing with female friendship achieve comparable prominence.

Starring Michael Caine as Fagan and newcomer Rafferty Law as Twist, the film shoots for high-energy with a driving soundtrack and some nice parkour work as the kids run about, bouncing off walls and skipping along ledges.

Regrettably the direction by Martin Owen is stuck in stop-start mode, leading to a very unexciting climax.

Lena Headey does well as a villainess and Caine deserves kudos for bringing his gravitas to the table, but the try-hard performances from the rest of the (mostly) young cast are a bland out. Little Britain’s David Walliams wasted.

It’s a strong bet that Twist was one of those ideas that looked great on paper, but got lost in translation once it went through the camera, which, incidentally, doesn’t do anything much that’s exciting or original, which is disappointing given all the running around the kids do.

Fun fact: The film’s soundtrack includes prominent use of the 2006 earworm hit Chelsea Dagger by The Fratellis, which some might recognize as the present 3AW footy show intro theme.