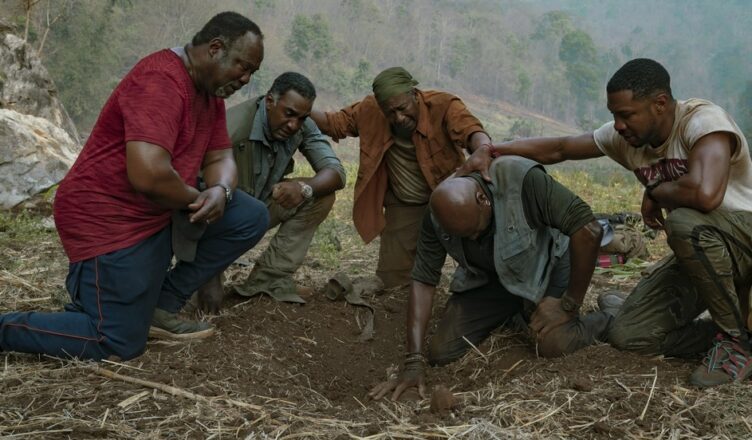 DA 5 BLOODS *1/2 (155 minutes) MA
There’s a strong sense while enduring Spike Lee’s messy, massively overlong Vietnam adventure that the heavy messaging the director is famous for could have served the film so much better had it been skillfully blended into the story rather than repeatedly thumped over your head, sledgehammer-style.

Though they seem to have come to it about 20 years too late, a group of elderly African-American veterans – Paul (Delroy Lindo in a strong performance), Otis (Clarke Peters), Eddie (Norm Lewis) and Melvin (Isiah Whitlock Jr) – reunite to head back into the jungle on a special dual-purpose mission.

They want to locate the remains of their beloved squad leader Norman (Chadwick Boseman) and retrieve the stash of gold bullion they left behind during a firefight with the Viet Cong some 50 years earlier.

The group is joined by Paul’s son David (Jonathan Majors), who is worried his opinionated dad will be putting himself in danger he can’t get out of.

From the get-go it’s pretty clear Da 5 Bloods would have worked much better as a streamlined genre caper film (a la Lee’s Inside Man) with its messaging seamlessly embedded into the narrative, (a la BlaKkKlansmen).

No such luck. There’s a lot of cinematic gear grinding in this clunky, ill-formed brick of a film as Lee continually switches modes from buddy movie to caper movie to message movie to docu-drama.

It’s scattershot direction at its most haphazard and bloated. Admittedly, Lee is great when bonding the men in their shared purpose – he’s always been a fine actor’s director – and he seems to love staging action, showing a particular penchant for the digital enhancement of muzzle flash and bullet wounds.

When it comes to making his Big Important Points, however, Lee hits monstering mode and thunders away in so grandiose a manner they reek of being force-injected afterthoughts. He shoehorns in references to Martin Luther King Jr, Angela Davis and even Black Lives Matter, with Muhammad Ali’s famous anti-Vietnam quote front-loaded into the film’s intro.

Things get so laboured that late in the film one of the characters begins addressing the camera directly. Why? Anyone who hasn’t gotten the point by this point has either been asleep or has dipped out to watch Eurovision.

As well, there are some pretty contrived moments, such as the improbable coincidence that leads the men to the gold, and their mid-jungle encounter with a group of land mine activists they met at a bar. We’ve also got a miscast Norm Lewis who, at 57, would have made him eight years old during his tour of Vietnam. Could Lee not have aged the guy a little? It’s just straight-out lazy storytelling that compounds the film’s sluggish pace.

The film is also tripped up by its all-too-obvious Leftist leanings and attempts at historical revisionism.

One case has veteran French actor Jean Reno stepping in as the financier for the mission, though his main function is to embody the evils of French colonialism and to take belated punishment for it.

The same with Paul, angry but thinly drawn, who is singled out as a Trump-voting, build-the-wall Republican. He isn’t there to offer an alternative viewpoint to dial up the film’s drama or to explore some confronting politics but to provide Lee with a convenient punching bag.

This cheap ploy results in some predictable race card plays, the lamest being the trope that accuses Trump of being racist, a common assertion that can’t survive a basic fact check. And does Paul, supposedly a rabid Right-winger, object when the comment is made? Of course he doesn’t. It’s just weak political point scoring.

Added to that is how the film, like so many films before, attempts to reassign authorship of the Vietnam war, an asinine practice that should have ended long ago.

In Da 5 Bloods Lee is happy to throw a MAGA hat around as a symbol of his well-publicized hatred of Trump and feature caricatures of Richard Nixon as a war monger.

Yet the film makes no mention, as usual, of how the unholy mess of Vietnam was initiated by the Democrats and escalated, over six painful years, by President Lyndon B Johnson. Why not bring him into the discussion and make things more interesting?

Despite its many flaws, the plight of the African American soldier in Vietnam is well-made in Da 5 Bloods, chiefly through snippets of propaganda princess Hanoi Hannah (Veronica Ngo) telling them how exploited they are.

So the film deserves some kudos for addressing the cinematic record. If only Lee had more deftly woven that theme into the story rather than working it with the subtlety of a nail gun.

The film could be a case of cinematic over-reach. With his 1992 three-and-a-half-hour epic Malcolm X it was clear that Spike Lee was deeply in love with the power of docu-drama, a format that had lent such force to 1991s JFK, which showed director Oliver Stone at his angriest.

Lee deploys plenty of docu-drama devices in Da 5 Bloods, using archival footage, emotive pop music and different film textures as he goes from widescreen to square frame for flashbacks. It all comes across as clumsy rather than classy – and a little desperate.

That Lee can’t match the visual storytelling skills he showed in Malcolm X is sad enough. Sadder still is that he hasn’t matched the dramatic peaks he hit in such terrific films as Do the Right Thing, Jungle Fever, BlacKkKlansmen, 25th Hour and Summer of Sam.

With the Black Lives Matter protests presently rousing the triple spectre of systemic racism, white privilege and police hatred, the film is being widely touted as having dropped at just the right time.

Still, claims that Da 5 Bloods captures the mood of the nation need to be measured against the wanton destruction of innocent people, neighbourhoods and businesses, many of them black.

These are things Spike Lee would not want him or his film to be aligned with. Surely.