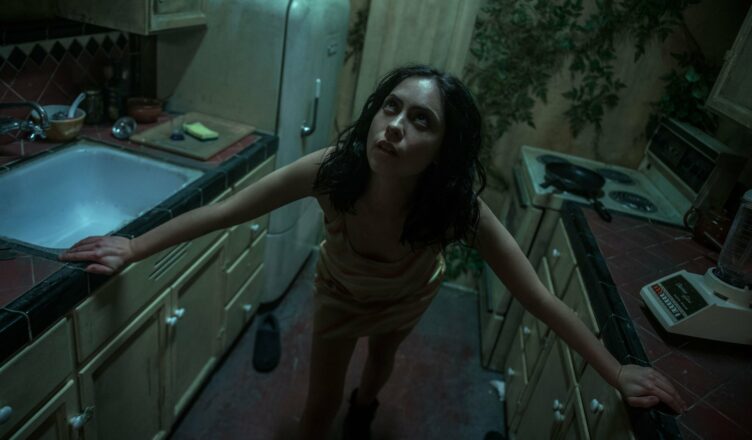 Take Lisa Nova, for instance. A budding young filmmaker trying to make it in early-1990s Hollywood, she enlists the aid of Boro, a local witch, to put a curse on sleazy, has-been film producer Lou Burke.

For payment the witch doesn’t want money. She wants the thing the unwitting Lisa has growing inside her, which she involuntarily vomits up. On cue.

It’s not a one-off, either. Lisa has to puke up payments several times throughout Brand New Cherry Flavor, a gloriously low-brow gorefest that blends the excesses of body-horror and B-grade aesthetics into a killer comedy.

Laced with crackling dialogue, dialled up performances and with its tongue firmly in its cheek, Brand New Cherry Flavor likes to lay it on thick when it comes to delivering shock moments; Lisa’s periodic puking is just part of the gruesome array of fabulous, undeniably gratuitous gross-out effects studded throughout the show, each designed to elicit a delighted “ewwww!” every time they pop up – or out, as the case may be.

If you like your exploitation horror served up with plenty of sauce and a carefully measured tincture of cheese, Brand New Flavor Cherry should prove a relentless over-the-top treat, end-to-end.

Lisa (Rosa Salazar, also a producer) is called to Hollywood by Lou Burke (Eric Lange), an Oscar-winning producer now on the fade who wants to adapt her short horror film into a feature.

In keeping with the Hollywood stereotype of Hollywood producers, Burke lures her in to signing a contract by dangling some juicy promises before her wide, hungry eyes before claiming ownership of the project. To illustrate the full measure of his character, Burke also assaults her.

Seething with revenge, she visits Boro (Catherine Keener), a local witch she met at an industry party, and asks her to curse Burke’s life in exchange for vomiting up little prizes for her.

Things don’t go quite as Lisa had hoped; her simple desire for revenge leads to a surprise-filled comic swirl of betrayal, low-level intrigue, black magic, murder and excursions into the spirit world involving visions that prey on Lisa’s troubled backstory, both in the making of her short film and beyond.

Created by Lenore Zion and Nick Antosca (Channel Zero) and based on the book by Todd Grimson, Brand New Cherry Flavor wisely shows its hand early as a playful mashing of George A Romero, Stephen King, early John Carpenter and David Cronenberg.

To wit: the film features a sex scene that easily ranks as one of the most graphic, eye-popping sexual encounters ever staged for TV or film. Not wanting to give anything away, suffice to say it involves full penetration and a rather novel point of entry. It is a real jaw dropper. When you expect the camera to cut away, it goes into close-up. Pure Cronenberg.

That’s just a taste of how graphic and gory the show is, and thankfully most of the effects are practical, with very little noticeable digital enhancement.

It’s a prime illustration of the enduring advantage analogue has over digital when it comes to freaking people out; that realism and texture you get by actually staging something in front of the camera rather than conjuring it up via computer is one of the dark delights on offer throughout Brand New Cherry Flavor. Old-school horror fans will love it.

The fruity lead performances suggest a three-way competition to see who could chew the scenery more.

As the embattled Lisa, Rosa Salazar puts in an impressive marathon turn, showing just enough dread and horror to keep the shebang from drifting into parody.

Opposite her much of the time, Eric Lange totally nails what must have been an uphill job; Lou Burke is a slimy, scheming parasite and pretty detestable, yet he is also a family man and possesses a turn of phrase that almost makes him likeable.

Still, it’s Catherine Keener as your friendly neighbourhood witch Boro who steals every scene she’s in.

Sporting turquoise lipstick and a mass of hair that looks like it was fashioned by somebody with a force-10 hairdryer, Keener puts so much cheese into her performance you can almost smell it.

Confident in her power to manipulate, she inhabits a marvellously designed suburban lair resplendent with over-grown greenery and an assortment of zombified ghouls who dutifully serve her. It’s such a great set-up.

There are a few moments in the final episodes where Lisa quips how all these supernatural shenanigans are all because of her modest desire to make a movie.

So it’s possible that amidst all the bloodshed, torn flesh and cheap thrills of Brand New Cherry Flavor there dwells a cleverly encoded allegory of the dog-eat-dog world of Hollywood filmmaking, where people will do anything to make a deal, however stomach-churning it might be to witness.