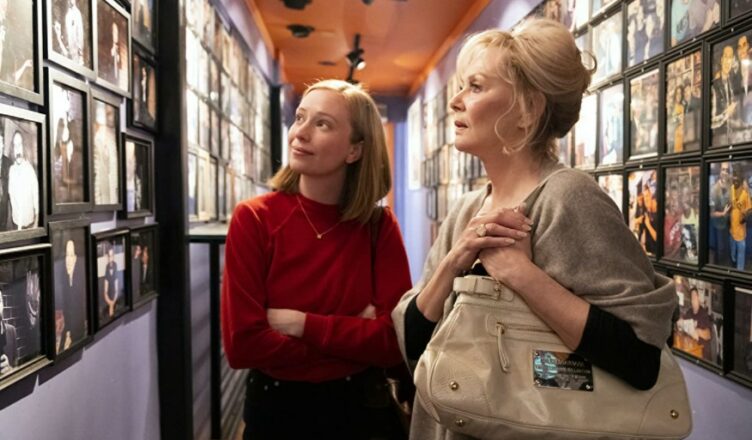 Sharing the moment: Hannah Einbinder and Jean Smart in ‘Hacks’.

Hacks *** (309 minutes; 10 episodes) MA
full season review
For the most part Hacks shapes up as a pretty good, fairly engaging opus about the inevitable generation-gap tensions that boil over between an ageing Las Vegas comedian who refuses to fade and the marginally talented Gen-Z comedian sent to write for her.

By and large, the show does a reasonably sharp job teasing out the serious business of being funny on a corporate scale; long-denied realities come home to roost in the face of hard-earned success (in one case) and early career burnout (in the other).

There are some pretty big missteps in the concluding episodes of Hacks as it strains to tick some #metoo boxes and go woke, fumbles that are at odds with the playful, serio-comic vibe the series admirably maintains for most of its duration.

The reason for Ava’s plight is all-too-current: as an up-and-coming comedy talent, she has committed the worst of all possible sins by tweeting something that landed badly.

As gigs evaporate before her, Ava’s agent Jimmy (Paul W. Downs) eager to give her nose-diving prospects some relief, sends her to work for Deborah Vance, a big-mouthed comedy icon happily ensconced in a long-standing stand-up residency at a glitzy hotel.

As it happens, Deborah is in a spot of bother herself.

As she approaches the advent of her 2500th show, hotel manger and long-time friend Marty (Christopher McDonald) politely begins elbowing her, saying that her run must end so he can book a younger, fresher marquee act.

The arrival of Ava sets the sparks going as Old School meets New School; the fizzy chemistry between the two drives Hacks as they argue and snipe over political correctness, relationships and the nature of comedy.

Admittedly it’s the standard odd-couple comedy formula at work here, yet it evolves with a pleasing emotional believability that factors in wild changes of temper and flat-out contradiction (an over-looked element in the portrayal of human relations in TV & film).

Initially Ava and Deborah bounce off each other like firecrackers, two desperadoes at war with each other, yet in need of the other.

Gradually the bond strengthens, and it’s very pleasing to behold thanks to some good direction and the decision to give some scenes the time they need to breathe.

To wit: at first Ava is blithely, and somewhat arrogantly, dismissive of Deborah as an out-dated comedy warhorse.

Commanded to digitize Deborah’s archive, she comes to respect her history, both as a trail-blazing comedian and as a person who has suffered the indignities of a bad marriage and an unfair media.

Still, Ava is never quite able to break free of her love-hate embrace of Deborah, a collision of admiration and antipathy that sees Ava defending and deriding her employer in equal measure and with equal passion. It’s a complex emotion captured exceptionally well.

It’s a heck of a character journey Ava is on that provides a truly painful portrait of loserdom when a chance encounter with a group of “friends” drives Ava into the very depths of professional and personal despair.

It’s here, as Ava hits her lowest point, that Einbinder’s marathon performance hits its peak; desperate for direction, Ava is forced to feel what it is like to be truly lost. Dramatically it’s the best, most touching part of Hacks.

More high-key are Deborah’s on-going adventures with management, plastic surgery and her established style of punchline comedy; Ava proposes she shift her act from Old-School jokes and putdowns to something more personal and New School, connecting with the audience with inner-truth rather than gags.

Smart, for her part, is a ball of sardonic energy, portraying Deborah Vance as a seasoned figure who refuses to be consigned to has-been status; her worldly, know-it-all disposition plays beautifully off Ava’s Gen-Z know-it-all arrogance.

Regrettably, the final stretch of Hacks does feature a few stumbles that should have been finessed into important story points, not left as cheap point scoring.

One small, sorry example has Ava indulging in a bit of cancel culture BS. She tells her ailing father over the phone to get rid of his Woody Allen comedy albums, playing on the much-publicized historic allegations about Allen’s behaviour towards his daughter.

Ava delivers this quip in the comfort of solitude and, to be blunt, it’s a bit low of the makers of Hacks to take a swipe at Allen in such a cowardly fashion.

Surely, it would have served the show’s premise much better had Ava said it in front of Deborah who, as a vintage comic, could then have challenged her with a fiery discussion about the merits of cancel culture and WokeThink.

A similar, though much bigger fumble comes when Deborah goes with Ava to an old comedy club she played in her youth to try out some of the new material Ava inspired.

As luck would have it, the place happens to be run by a chauvinist cliché from the 1970s who is purely there to provide the show with a #metoo punching bag.

It makes for a really limp episode, and carries the highly dubious message that the surest way for women to combat patronizing sexists is to buy them off with huge amounts of money. It’s the weakest part of Hacks, a prime example of well-intentioned messaging gone wrong.

Almost as weak is the show’s climax where Deborah, facing her final residency crowd, has the choice of either delivering a standard routine or going with Ava’s idea of a deeply personal, spoken-word monologue.

Given how embedded social media is throughout the story, it comes as something of a shock to see it totally sidelined at a this story juncture where its prominence and impact would seem inevitable.

And it’s all in the service of an ending that, dramatically and comedically, just doesn’t work.

Still, there is a clever tease in the tail to leave us on a nicely foreshadowed knife edge, offering the promise of a more reality-based reckoning once Hacks returns with its second season.