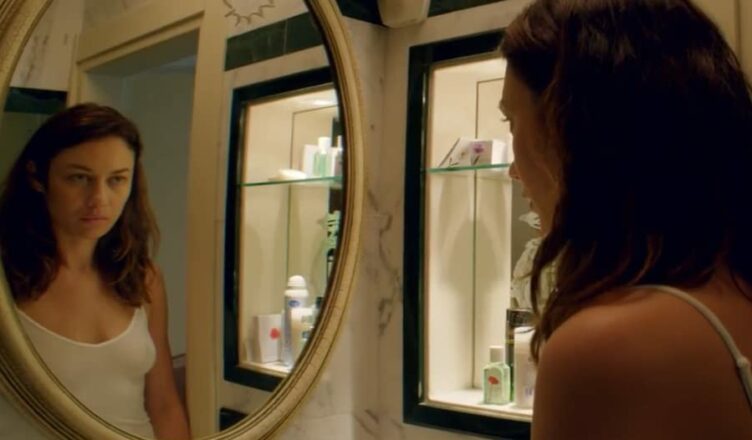 Reflective drama: Olga Kurylenko stars in the mystery-thriller ‘The Bay of Silence’.

THE BAY OF SILENCE **1/2 (94 minutes) M
Pity poor Will (Claes Bang), an architect who has just opened a new chapter in his life. He’s married the beautiful photographer Rosalind (Olga Kurylenko) and moved her into a big, beautiful house with her twin daughters from a previous marriage.

Just at the point where life looks like it can’t get any more romantic amidst the sun-splattered splendour of coastal Italy an accident occurs that induces birth and sets in train a series of strange and unfortunate events.

Tormented by an unnamed trauma, Rosalind’s behaviour leads to his family’s disappearance, forcing Will down a dark avenue of investigation trying to discover where she is and what is going on.

The answers he uncovers in the windswept beachfront of France are troubling and tragic as he learns the truth about Rosalind’s mental state.

As far as mystery-thrillers go The Bay of Silence contains the requisite number of twists and turns after drawing you in with a seductive opening reel. Director Paula van der Oest does a deft job of shifting atmospheric gear as Will’s journey gets deeper and darker. The film is what you can fairly call a serviceable thriller.

Still, while there are some good surprises on offer as we follow Will on his quest to find out how and why his life got turned inside out, there are no real surprises in the surprises.

Beautifully photographed, The Bay of Silence is a very traditional mystery that fans familiar with the tricks and tropes of the genre might find a tad too traditional as they twig to recognizable patterns in the story. In other words, the film’s unpredictability can, itself, become predictable.

Based on the 1986 novel by Lisa St. Aubin de Teran, the film was produced and written by Caroline Goodall, who also has a small role.

Writing and producing The Bay of Silence, an independent film, was a bold venture for Goodall.

As a renown actress with an international reputation, Goodall acknowledges that she could have coasted on her credentials for the rest of her career but chose to pursue the challenges of making a film to expand her creative horizons.

She also admits how she enjoys the drama and discipline of film production.

Speaking from her home in Tuscany to mark the film’s release on DVD and digital, Caroline Goodall was in an especially loquacious frame of mind on the morning she took this Skype call.

Her natural enthusiasm, willingness to develop topics and ebullient good nature invoked the First Rule of Interviewing, which states: when you have someone as awesome as Caroline Goodall on the line and she wants to talk, you let her fly.

Thus, the feature interview is presented in two parts: the first about making The Bay of Silence, the second touching on some of the highlights of her formidable career.

There is also a brief, condensed version of Part One (a sizzle reel, if you will), just in case you don’t have time to sit down with a coffee and listen to Goodall’s articulate, illuminating and, most of all, entertaining observations about making The Bay of Silence and about her career.