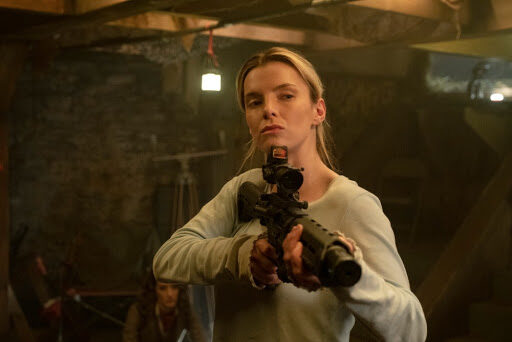 Taking aim: Betty Gilpin blasts her way through ‘The Hunt’.

THE HUNT *** (104 minutes) MA
In what has widely and inaccurately been described as a “controversial” movie – is it not the most over-used adjective in modern life? – a group of wealthy liberal elites kidnap a group of ordinary right-wing citizens, release them in a field, supply them with weapons, then begin hunting them down – only the game doesn’t go quite as planned.

There’s as much blood, gore and killing here as you’d get in any reasonably well-made C-grade splatterfest, yet what makes The Hunt especially fun is the heavy sprinkling of gags and references to contemporary politics, PC-speak and the over-heated outrage culture spawned by the culture war between the Left and Right in Trump’s America.

Clearly knowing the genre’s conventions inside out, director Craig Zobel, who gave us the chilling 2012 indie drama Compliance, efficiently dispatches the cast at an alarming and unpredictable rate, making sure each deployment of movie blood comes with a nicely judged jolt.

The film’s big selling point, though, are all the fleeting, earnestly delivered japes about racism, gender identity, Trump’s “deplorables”, climate change, politics, online culture and so forth.

They are funny and well-timed, to be sure, though some have been tricked into taking these topical gags as some perspicacious critique about the state of the world.

That’s phooey, for the most part. The film’s snarky humour is just a clever ruse to conjure the illusion of controversy. It’s the cinematic version of “trolling”, where one party engages in behaviour they know will boil the blood of the other, usually for sheer amusement.

And it’s worked for The Hunt, to an extent, in that it’s aroused large amount of silly commentary trying to decipher the film’s non-existent subtext. It even got to the ear of US President Donald Trump, who implicitly slagged off the film in a tweet last August, even though he hadn’t seen it.

If pressed, you could say the film, which features a wonderfully straight-faced, trigger-happy performance from Glow’s Betty Gilpin – joining a long list of female action heroes – offers a cheeky backhander to the self-righteousness that dominates too much public discourse.

Beyond that, it would strain any brain to see The Hunt as anything more than a blood-speckled piece of splatter cinema with a mischievous mind and a huge body count.

The film has had a rocky release history.

It was meant to come out last September in the US, but the mass shootings in an El Paso Wal Mart on 3 August (22 killed; 24 injured) and on 4 August outside a crowded Dayton nightspot (nine killed; 27 injured) prompted Universal to shelve the film, a move director Zobel supported.

The film finally came out on 13 March but only lasted a week before the measures against the Coronavirus shut cinemas nationwide. It was released into the US stream on 30 March, and here last Friday (9 April).

It’s a fun, throwaway jaunt, just be aware of that $19.99 rental price, which is less than most cinema admissions. That is the premium you pay for getting a new film inside that once-precious 90-day window between the theatrical and streaming release. It’s a window that is cracking under the privations of CV19.