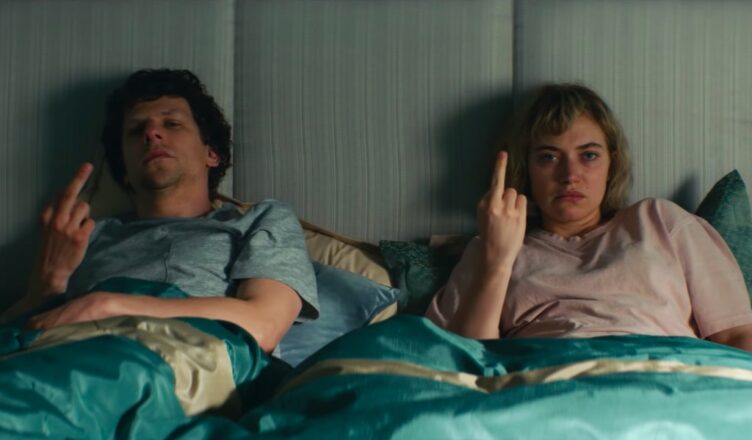 In their search for a home in which to build their new lives together hard-working, clean-cut couple Tom (Jesse Eisenberg) and Gemma (Imogen Poots) are taken by a creepily obliging real estate agent to a new housing development where all the houses look exactly alike.

Mysteriously left on their own, Tom and Gemma try leaving the estate yet their various attempts to get home lead to the unnerving discovery that all routes lead to the same house.

Clearly inspired by the dream-gone-wrong spirit of such shows as The Outer Limits, Amazing Stories and The Twilight Zone director Lorcan Finnegan, who conceived the unpredictable, inventive story with screenwriter Garret Shanley, does a fine job keeping you guessing about what can possibly happen next in such a claustrophobic scenario.

The film cleverly plays on two themes common to most nightmares, namely loss of control and pointless toil, and it’s made all the scarier with bright lighting, a limited colour palette and an under-the-skin soundtrack.

For deep readers, Vivarium could be taken as an allegory about ordered suburban life and the lack of choice people have once they become fully domesticated. It certainly keeps you wondering about what exactly is going on with our hapless, helpless couple.

To their credit Poots and Eisenberg, who also produced the Irish/Danish/Belgian film, do great work conveying how anger and frustration over a bizarre circumstance can lead to a begrudging acceptance that helps make the torment of a living nightmare tolerable.