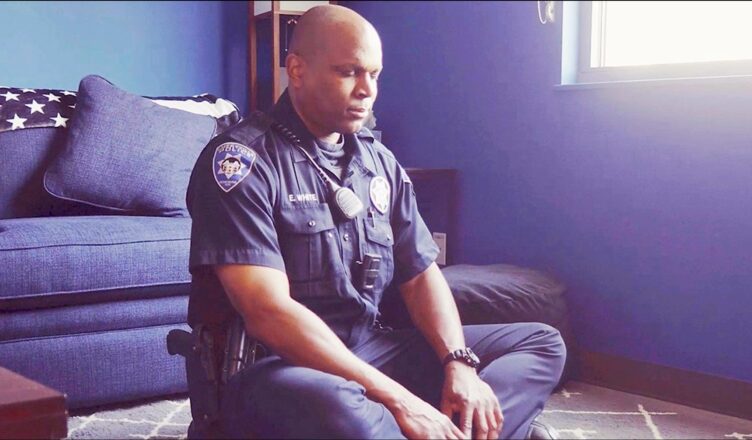 Going deep: a police officer seeks inner-peace in the documentary ‘The Mindfulness Movement’.

THE MINDFULNESS MOVEMENT **1/2 (97 minutes)
Anything that claims to relieve stress, anxiety and an easily distracted mind is always going to find favour fast, which no doubt accounts for why the practice of “mindfulness” has gained so much traction so quickly.

Conceived as an antidote to the type of frantic FOMO – Fear Of Missing Out – lifestyle engendered by the digital devices that run, rather than help run, our harried lives, mindfulness is embraced by millions – including good advice goddess Oprah Winfrey – as a way of introducing tranquility and control into the daily grind.

The Mindfulness Movement, directed by veteran TV producer Rob Beemer, is essentially a nicely filmed collection of invariably enthusiastic testimonials about the effectiveness of the exercises, breathing techniques and meditative practices involved in this sit-on-the-floor method of making life better.

Those who are either into mindfulness or are eager to get into it will no doubt find this film an informative prep kit of uplifting anecdotes and inspirational interviews.

Still, the film plays like an extended commercial. It could well have done with more rigourous inquiry into mindfulness culture as well as a dose of healthy skepticism, such as the notion that mindfulness is just a New Age version of The Power of Positive Thinking, published way back in 1952.

What the film certainly should have done without is the terrible infomercial music that plays under most of the interviews. The insipid music sounds like it was inspired by the backing tracks to those old ads about the Church of Scientology. Urgh.

Still, it’s hard to remain totally skeptical given the long list of endorsements from returned soldiers, former drug addicts, cops, ordinary people, prisoners and even the singer Jewel, a huge mindfulness advocate who swears it changed her derailed life. She helped produce the film with alternative medicine maestro Deepak Chopra, who also appears in the film.

Apart from its standard menu of selling points – hey, all credit to anything that makes prisons easier to control – mindfulness is no doubt enjoying a huge boost at the minute as people search for something to engage them while being stuck in Coronavirus confinement.

The film’s plan for a major US tour during April was, of course, cancelled because of the Coronavirus. It is, nonetheless, available for streaming at themindfulnessmovement.com