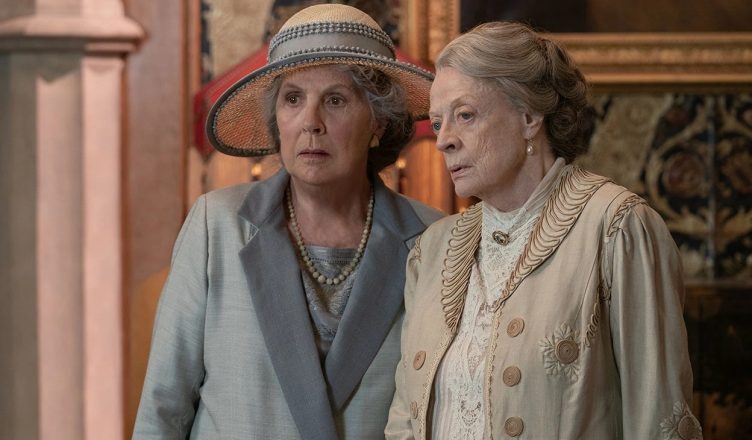 DOWNTON ABBEY: A NEW ERA ***1/2 (125 minutes) PG
The One Big Rule of sensible sequel making is in full effect in the rather excellent Downton Abbey: A New Era: stick to the formula and deliver more of the same, just add a few nourishing new titbits to keep the thing feeling fresh enough and not like it’s yet another cynical going-through-the-motions exercise.

In glorious evidence throughout the second film based on the super-successful TV series is that director Simon Curtis ( My Week with Marilyn; Woman in Gold)and creator/screenwriter Julian Fellowes know on what side their bread is buttered and steadfastly refuse to mess with it.

Dialling up the humour several notches, the new lark finds the Crawley clan and their army of servants in 1929, a year that sees family matriarch Violet Crawley (Maggie Smith in fine form) casually announce that she’s suddenly become even richer.

Seems that a week-long fling she had with a newly deceased Frenchman some 60 years earlier has landed her with a huge villa in the south of France, presumably as belated thanks for what must have been seven days of magnificently memorable bonking.

The understandably peeved-off widow (Nathalie Baye) wants to challenge the will in court while her more moderate son (Jonathan Zaccaï) is looking for a more amicable settlement, and extends an invitation to come visit.

So she sends son Robert (Hugh Bonneville, trimmed down and looking terrific) down to sort the matter out. In tow is wife, Cora (Elizabeth McGovern), granddaughter Edith (Laura Carmichael) and stuffy comic-relief servant Carson (Jim Carter).

While they sort through the deceptive pleasantries of what is supposed to be a straightforward visit, back at the digs it’s Excitement Central.

A film crew has arrived to shoot a movie, which brings plenty of fun and anticipation as the young servants get giddy over the presence of stars in the house, most notably the suave Guy Dexter (Dominic West) and the egotistical Myrna Dalgleish (Laura Haddock in the film’s funniest turn), who has attitude, beauty and a jagged Cockney accent perfectly suited for silent cinema.

In a clever conceit, the film crew is forced to convert to the new-fangled sound mode to keep from shutting down.

The scenario produces lots of lovely bits of business about filmmaking, with giant lights, hand-cranked cameras and ancient sound recording equipment taking centre stage in some generously paced set pieces as they try doing a scene with sound.

There are some very funny moments, with the new technology drawing in the creative contribution of the household, including the mellifluous voice of Lady Mary Talbot (Michelle Dockery). She has poise and grace and knows exactly how sexy she is, especially to certain members of the film crew. What a gal.

Graced with assured performances and typically handsome production values – is it possible to make a bad-looking period film in heritage-listed Britain? – the film is full of expertly judged humour and touches of enticing family mystery, along with some politely progressive themes about class and sexuality, which are all the more effective for being restrained rather than bombastic.

Clearly made with love and respect for its followers, Downton Abbey: A New Era is a warm cardigan of a film, a comfortable costume comedy-drama with just enough twists and surprises to keep things spicy.

Abbey fans will obviously love it to pieces, though being a devotee of the TV series isn’t a pre-requisite to really get into the film. You could easily go in cold and quickly warm to it as a lush period piece.

While it works very well as a stand-alone film, they’re clearly wanting the film to set Downton Abbey up as a franchise, which is a pleasing prospect. One can easily see the film series dealing with World War 2 and beyond.

Perhaps we could even look forward to them bringing the goings on at the estate through the successive decades, film-by-film, and into the present day.