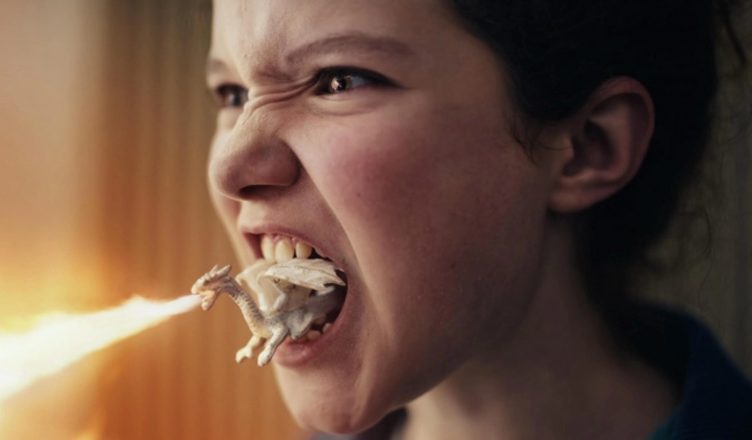 BLAZE ****1/2 (101 minutes) MA
It hasn’t been a great year thus far for Australian feature films, so how gratifying it is to relay that, by any fair measure, Blaze is a great Australian film, and easily one of the best local films of the last 15 years.

A truly unique directorial debut from Del Kathryn Barton, Blaze is an astounding, unsettling, visually arresting film that takes us into the mind of Blaze (Julia Savage), a teenage girl whose life and vivid imagination is disrupted after she witnesses a sexual assault in a laneway.

Realism defines the investigation into the crime, the subsequent prosecution and the efforts of her father Luke (Simon Baker) to deal with the living nightmare as his traumatized daughter begins exhibiting extreme behaviour in reaction to the event.

For Blaze, her distress and anger takes on the form of fantasy scenarios and creatures, the chief one being the resplendent figure of a giant dragon that inhabits her bedroom.

Featuring top-notch effects, both digital and analogue (there’s some amazing puppetry and stop motion animation) and excellent, intimate cinematography (kudos to Jeremy Rouse), Del Kathryn Barton does a splendid job creating the vivid alternative world inside Blaze’s head, something that sometimes crosses over as she copes with the harsh real-world impact the assault has had on her.

With top performances throughout, especially from Savage whose emotionally coherent portrait of a fractured young person holds the film together, the film brims with style, ingenuity and a rich palette of ideas and themes, some of which sport a sharp topicality.

And that’s not something that can be said about too many Australian films of late.