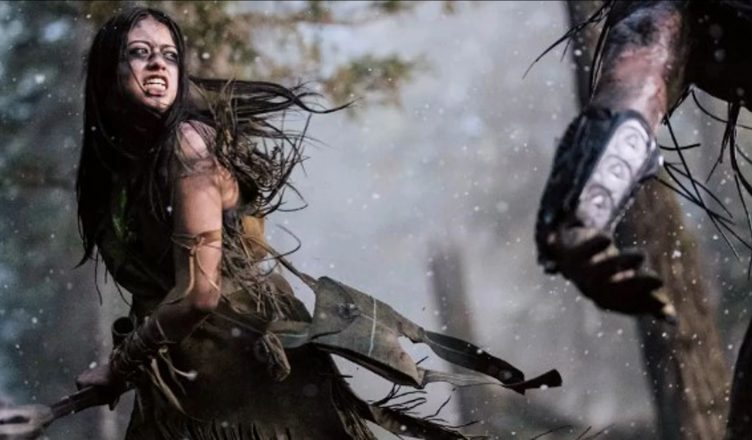 Bring it: A Comanche warrior (Amber Midthunder) takes on an alien foe in ‘Prey’.

PREY ***1/2 (99 minutes) MA
Whoever you are, whatever you do, wherever you come from, it’s a truth universally acknowledged that one of the most beautiful things a person can witness in life is the sight of new life being breathed back into a tired old movie franchise.

We saw it with the Die Hard, Fast & Furious and Pirates of the Caribbean series, where the fourth films revived a formula that was getting well and truly fatigued.

And now with Prey we see a reboot of the Predator franchise with a terrific film that not only hits the mark as a ripper action adventure but taps into a novel idea that could see the series continue in a bold new direction.

Given how we all could have merrily lived on without seeing yet another Predator film – there have been six, including the classic 1987 original Predator with Arnold Schwarzenegger (you needed to be told that?) – along comes Prey to reinvigorate our collective hunger for more films about over-sized, multi-jawed, semi-invisible killer aliens who consider Earth a nice hunting ground to visit during the summer months.

Here we see the Predator mother ship deposit a hunter into the beautiful flatlands of North America in the early 1700s when the landscape was host to the Comanche people as well as a few opportunistic poachers.

Our kill-happy friend is up for some fun, and initially finds the pickings easy, using his hunting prowess and his advanced weaponry to sharpen his appetite. Even a hapless wolf chasing a rabbit feels the sting of the Predator who, of course, promptly rips out its head and spinal column.

Ahh, nostalgia. Old-schoolers might even get a little misty-eyed.

While taking care of an angry bear, Predator encounters Naru (Amber Midthunder), a spirited young Comanche girl who, quite understandably, can’t quite understand what she is seeing. This beast not only sorts Mr Grizzly Bear out in short order, it phases in and out of visibility.

Once Predator sees Naru, you can almost hear him squeal with disappointment. What kind of challenge is this feeble little girl going to serve up? She’s barely an appetizer.

But oh, Predator, you chauvinist, extra-terrestrial sausage. Little doth yee know that what you’re facing here isn’t some squib of a squaw, she’s a feisty proto-feminist, a girl with a chip on her shoulder.

She’s already had it up to here with the gender stereotyping in her own tribe. Now you’re going to get yours, Predator – provided, of course, that Predator doesn’t tear Naru’s spine out first and uses it as a toothpick.

The film is a ripper, both figuratively and literally, with lots of well-staged action from director Dan Trachtenberg (10 Cloverfield Lane), who apparently loves the way things look as seen through Predator’s signature thermal vision and the distorting medium of Predator’s super-cool cloak of invisibility (Eat that, Harry Potter.)

As for the idea of sending Predator back in human history, here’s to more films that follow our friend as it visits various points in human civilization. How cool to see how the Ancient Romans deal with Predator, perhaps as he arrives in the middle of a Colosseum playing field full of lions and Christians.

And why not see him drop in on various stages of evolution, perhaps helping early humans learn how best to bring down woolly mammoths. Would even love to Predator visit the apes from <>em>2001 and show those other monkeys who’s in command of the watering hole.

THIRTEEN LIVES **1/2 (148 minutes) PG
It’s a fascinating story, to be sure, and one that was bound to be made into a feature, yet in vividly restaging the daring 2018 rescue of a trapped soccer team from the stygian depths of a flooded Thai cave veteran director Ron Howard delivers a surprisingly pedestrian, by-the-numbers account.

Shot in Queensland on some staggeringly realistic sets depicting the Tham Luang cave – initial plans to shoot at the actual site were nixed by Covid so the cave’s jagged, sinuous insides were vividly recreated – the film takes us step-by-step through the ordeal, pretty much following the lead of the excellent documentary The Rescue, released last year.

The performances by Colin Farrell and Viggo Mortensen as cave-diving specialists John Volanthen and Richard Stanton are excellent, with Joel Edgerton chiming in with strong support as Richard Harris, the Australian diver whose risky idea of anesthetizing the boys helped save the day.

In conveying the scale, danger and extreme physical difficulty of the event, no sympathy has been extended to anyone suffering from claustrophobia.

Not a detail appears to have been skipped, the persistent dripping of rainwater seeping in from above posing an unending threat to the mission to save the starving, shivering boys and their coach from dying from exposure or drowning.

So, all kudos to the huge and impressive production effort of Thirteen Lives.

That said, the film does go on and on, defaulting to a rather plodding rhythm in its endeavour to cover every angle, even those well-covered by the world’s media.

In Apollo 13 Howard showed what an exceptional director he was by embedding so much tension in a true-life story the outcome of which was a matter of historical fact. We all know the three astronauts survived the stricken mission, yet the brilliantly judged pause before the reveal of the capsule’s three parachutes opening roused a powerful feeling of relief and triumph.

Unfortunately, there’s nothing like that in Thirteen Lives to counter the obvious fact that we all know how the rescue turned out.

A degree of visual monotony also encroaches in the final reels as we spend more and more time in the depths of the darkened cave, with a predominance of dripping water, underwater swimming, ascending bubbles and people gasping for air. Rest assured, after seeing Thirteen Lives you won’t need to see another diving suit or oxygen tank for a long time.

Nonetheless, Howard does stage some memorable moments: the death of diver Saman Kunan (Sukollawat Kanarot) is especially gruelling to witness. (Notably, the closing captions also acknowledge Thai SEAL Beirut Pakbara, who died of a blood infection a year after the operation.)

BOILING POINT ***1/2 (95 minutes) MA
We can thank Gordon Ramsay for letting us all in on the chaos and meltdowns that can occur under the strains of running a restaurant, so there’s not much surprise to what we witness in Boiling Point, an exceptional film that takes us into the pressure-cooker conditions the strung-out employees of an uptown London eatery have to endure during an especially stressful dinner service.

Though things never get quite as crazy as they inevitably do with any given Ramsay adventure, what dials everything up to 11 in Boiling Point – coincidentally the title of the 1998 docu-series that made Ramsay famous – is that the entire scenario is captured in one extraordinary continuous take.

From awkward table service to difficult customers to problems with lazy back-room staff, the camera swirls about from one hotspot to another, the precision timing creating the impression that a seemingly random series of incidents is building to some sort of crisis before the kitchen closes.

The night kicks off with a kick in the privates as head chef and restaurant co-owner Andy Jones (Stephen Graham, from This is England; excellent and totally believable here) arrives to find the place has been hit with a warning from a perfectly judicious health department official.

Yet the night is young, like much of his waiting staff. Soon he and his colleagues are confronted with a cascade of issues, including: a cadre of smarmy Instagram influencers demanding special treatment; the visit of a powerful food critic; and, for good measure, the patronage of Andy’s former colleague, there to supposedly offer support on a night when the place might well go belly up.

It’s a riveting ride dramatically, made all the more engrossing by the camerawork. To give due credit to director Philip Barantini and cinematographer Matthew Lewis – the single shot device deployed in Boiling Pointis a step beyond what we saw in fine films such as 1917 and Birdman.

Whereas they cleverly created the illusion of a continuous shot, Boiling Point doesn’t use any editing tricks or digital effects. It’s the real deal from first frame till last.

WEB OF MAKE BELIEVE: DEATH, LIES & THE INTERNET ***1/2 (six episodes; five hours, 36 minutes) MA
whole series review
By now it should come as no surprise how keenly governments like to monitor and gather data on its citizens, and that they likely employ advanced technologies that are kept scrupulously hush-hush. All for our own good, of course.

Yet the revelations made in the final two episodes of the excellent documentary series Web of Make Believe still come as something of a shock that highlights how, in the interests of maintaining our safety and security, the giving of an inch can lead to the taking of a mile – and then some.

The two episodes follow the pursuit of two seasoned scam artists, so skilled in the art of major fraud they were able to turn ATMs into free money machines and collect huge tax returns from dead people.

Interviewed at length, it’ll play havoc with your conscience as you watch two fraudsters give an account of their cyber crimes, manipulating information and stealing identities to make them a fortune. You know it’s wrong, yet the degree of ingenuity involved elicits a degree of admiration, however begrudging.

The sting in the tail of one tale, however, is the revelation of how the government appeared to do the impossible by using a super-secret device to track down the precise location of a mobile phone signal.

Doing that involved sweeping up data from hundreds of innocent people as the machine, known as Stingray, searched for the law’s target phone.

Was the search legal? And if governments have access to such equipment, what else do they have in their technological arsenal to help them watch over us?

It’s a richly detailed and absorbing account of the power of anonymity offered by the Internet, typical of the other highly polished, thoroughly researched episodes, each of which involves the participation of victims and perpetrators, often to a startling degree.

Especially jaw dropping is the confessional tale of a young woman’s experience as the girlfriend of a neo-Nazi, an ideology she found herself drawn into.

Another offers a gruelling, all-too-recognizable story of sexual intimidation and blackmail as girls recount how their lives were disrupted, terrorized and threatened thanks to the ability of deviants to assume fictitious identities online.

The series kicks off with a harrowing chronicle of a practice called “Swatting”, whereby a jokester – usually a ticked-off gamer – puts in a fake emergency call and sends a fully-armed SWAT team to somebody’s house. In the distressing case covered here, the stunt resulted in the death of an innocent person and serious prison time for the perpetrators.

Produced by Ron Howard and Brian Glazer’s production powerhouse Imagine, Web of Make Believe is yet another extremely well-made, well-resourced cautionary tale about the downside of life online.

And though it’s not stated explicitly, the warning that underlies the series – and all other documentaries on the subject – is that these problems will persist so long as people are able to create online accounts without verifying who they really are.