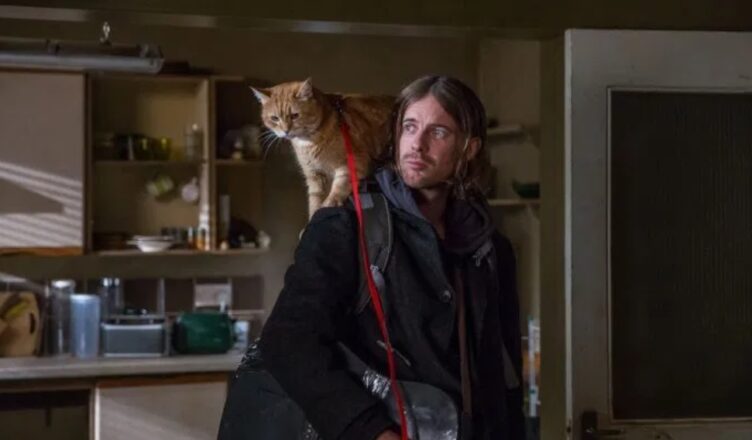 Christmas cat: Luke Treadaway and Bob the Cat star in ‘A Christmas Gift from Bob’.

The story of how happenstance brought Bowen and Bob together to enrich each others’ lives is based on Bowen’s real-life experiences as told in his best-selling books.

Here we find a tuxedoed Bowen, with Bob straddled across his shoulders as usual, at an authors party where his success is celebrated, and anticipation for his follow-up book is high.

Trouble is he doesn’t have an idea for a story. That is until Bowen rescues a homeless junkie from the clutches of his foe, nasty council worker Leon (Tim Plester), who again does fine work serving as the villain of the piece.

While feeding the homeless guy at a street cafe, Bowen recounts to him several tales of joy and woe involving community support, continued financial hardship, concern over Bob’s health and threats by animal welfare to take Bob away. Bowen also comes to question his ability to properly care for Bob.

We’re constantly reminded how Bowen, whatever measure of fame he has achieved through media coverage, still exists on that one rung of the social ladder above total destitution. Several dark moments almost feel like scenes from a Mike Leigh film as Bowen realizes just how precarious his purchase on that rung is.

That, of course, doesn’t prevent the film from homing in on a typical Christmas-movie ending. It might get a bit to sugary for some, but director Smith knows how to hit those emotional keys at just the right moment. It’s corny, sure, but it works well in concert with the film’s more dramatic stretches and so is likely to please any family audience that understands how the cheeriest stories need a bit of well-fashioned gloom to really shine.

The haggard performance by Treadaway (also serving as executive producer) hits some touching notes of desperation as the forlorn Bowen, buoyed only slightly by his local popularity, struggles to find enough money to keep the lights on. When the threat to remove Bob hits he is afflicted with an anxiety that is almost child-like.

The cat is again played by the real Bob, who sadly died shortly after production, and some other feline stand-ins.

There is, thankfully, no sign anywhere in A Christmas Gift from Bob that Bob was played by a digitised cat – a minor miracle that might be the greatest Christmas gift of all. Sorry about that, World Peace.