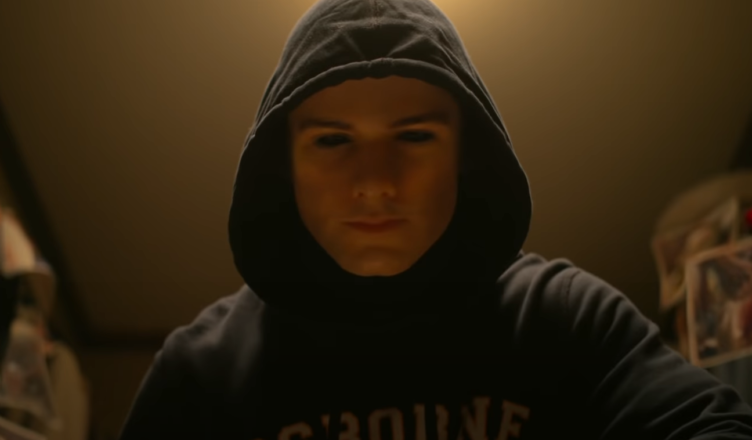 Mask up: A psycho is on the loose in the old-school slasher ‘There’s Someone Inside Your House’.

THERE’S SOMEONE INSIDE YOUR HOUSE *** (95 minutes) MA
It’s terrifying enough that a mask-wearing killer is working its way through the student body of a small, cash-strapped Nebraska town. Each deep slash of the knife produces sprays of blood from vivid wounds we get to see in close up. That’s bad enough.

Yet in the proficiently mounted, convention-loving, throwaway 1980s slasher throwback There’s Someone Inside Your House there lurks an evil that is far more horrific, far more sinister – school-girl poetry.

Like all good low-flying slasher films, the killings have a ghastly motivation, the case here being the secret sins of the victims.

It’s as though our masked murderer is acting as the spirit of karma, doling out punishment to students whose hidden deeds have transgressed in some way, and which the killer makes public via social media.

The killer overdoes it, of course. After all, it’s a bit rough to fatally fault somebody merely for poor taste or for poor judgment, as is the case here.

One daffy young student is silly enough to have once put out a podcast hailing White Power, and stupid enough to leave it up. Not admirable conduct by any means, but do they really deserve to be so thoroughly garrotted?

Though they’re never actually scary, the moments of gore have a nice, nostalgic feel and are delivered well with echoes of early John Carpenter.

Some nice touches from the sturdy, straight-faced no-name cast bring a sprinkle of gags about wokeness to the bloody proceedings. And the film is not without wit. Turning Nazi memorabilia into bongs? Genius.

Director Patrick Brice (working from a screenplay by Henry Gayden, which sprung forth from the 2017 book by Stephanie Perkins) dutifully follow the genre rules right up to that “surprise” ending you can comfortably guess from about the half way point.

Boasting big-name producers James Wan (Saw; Insidious; Aquaman) and Shawn Levy (Free Guy; Real Steel) , the slashing and gashing is all fairly easy to take – just brace yourself for those bursts of schoolgirl poetry. They’re enough to make you runs out of the room screaming in terror, even if nothing else is.
Netflix