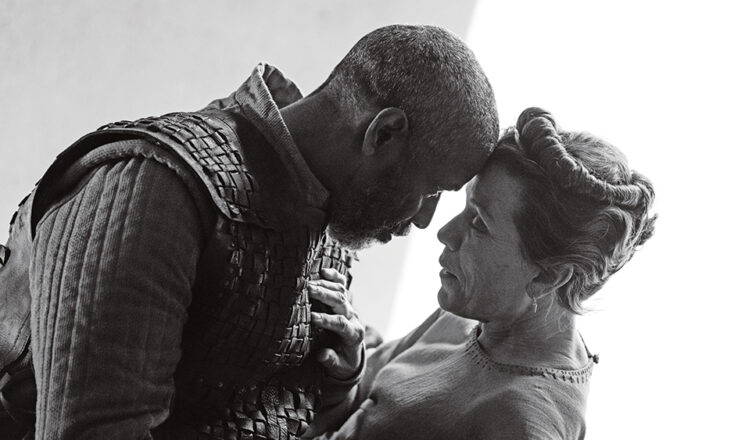 Plot point: Denzel Washington and Frances McDormand in ‘The Tragedy of Macbeth’.

THE TRAGEDY OF MACBETH *** (105 minutes) M
Brandishing more scowls in five minutes here than in any of his Equalizer movies, the reliably magnificent Denzel Washington puts in a sterling central performance as William Shakespeare’s most weak-willed, comprehensively whipped monarch.

With Frances McDormand behind him, literally and figuratively, as the wicked Lady Macbeth, writer/director Joel Coen (sans longtime collaborator and brother Ethan) mounts an admirable, absorbing, if somewhat conventional adaptation of The Bard’s timeless tale of power, prophecy and walking trees.

Visually, the film is striking. Shot in expressionist black-&-white in the old-school, much-loved academy ratio (1.37:1), the murderous drama is played out amidst imposing arches, cavernous chambers and oppressive corridors on huge studio sets.

The amped up presence of shrieking crows add the necessary air of portent amidst all the brutalist set design. It’s impossible not to see the use of all these nasty black birds as a nod to Alfred Hitchcock and The Birds.

With a face burning with muted rage and lust for power, Washington registers another compelling lead performance, his portrait of Macbeth a boiling cocktail of contradiction who, just like other Shakespearean leading men, just can’t tell good advice from bad.

He heads a top-flight supporting roster: Harry Potter’s Harry Melling is so good as Malcolm; Bertie Carvel is a stern, convincing Banquo; Kathryn Hunter plays all three witches. McDormand is simultaneously prim and slimy, a devious combination she pulls off with a greasy grace.

Most notably, Brendan Gleeson chimes in with noble heft as the doomed King Duncan, the sorry monarch who learns far too late that generosity is its own punishment

While impressive and visually stark, Coen’s adaptation does operate within the wheelhouse of what you’d expect; conceptually there’s no real innovation or rethinking of what the play is about or where it could be set. Even the rendering of the famous finale – where the trees of Birnam Wood fulfil the witches’ prophecy and march to Dunsinane Castle – is an echo of what has been done before.

The Tragedy of Macbeth is a fine adaptation, to be sure, yet its limited vision sets it squarely in the shadow of such great adaptations as Akira Kurosawa’s Throne of Blood (1957) and the undiminished brilliance of Roman Polanski’s Macbeth (1971), pound-for-pound the best version of the work thus far.

One truly pleasurable aspect of Coen’s film is listening to great actors putting their spin on those great lines, whether in soliloquy or extended dialogue exchanges.

One of Shakespeare’s great gifts is how he engages the mind and captivates the imagination with words, a timeless quality honourably preserved here.