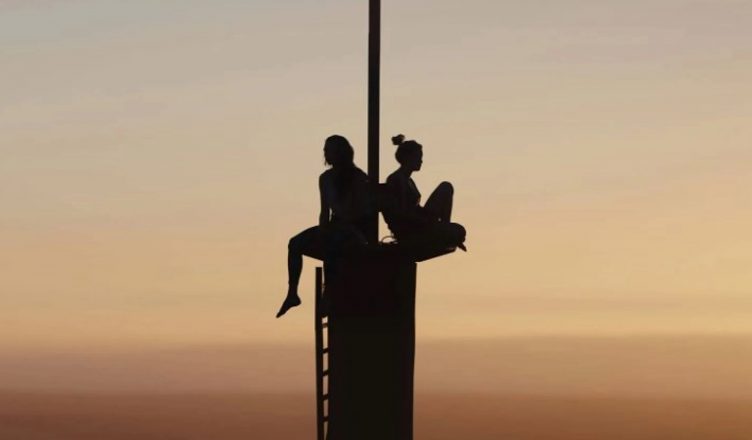 Stuck: Two thrillseekers get stranded on top of TV tower in ‘Fall’.

FALL **** (107 minutes) M
It might not be very eloquent, but the best way to describe the armrest-clutching thrills served up in the superbly mounted Fall is that people with vertigo should probably steer clear, while those who enter the film without vertigo will likely contract it by film’s end.

Made on a puny budget of around $US3 million and without the use of key-screen photography (where exterior backgrounds are inserted into studio footage), Fall follows two girls on an ill-advised adventure to climb an abandoned TV tower that reaches 600 metres into the skies of the Mojave Desert.

Perilous and foolhardy as the enterprise is from the outset, the climb is strongly motivated.

With a huge online following to satisfy, Hunter (Virginia Gardner) plans to video the ascent to the very tip of the rusting spire.

Accompanying her is bestie Becky (Grace Caroline Currey), a lapsed climber still grieving a year after losing her husband during a cliff-climbing expedition.

The poor girl in no mood to climb anything, let alone a rickety space needle. Yet Hunter persuades Becky that joining her on the climb to the tip of the tower will dissolve her fears and help her confront the future.

It’ll also provide a symbolic and spectacular venue from where Becky can finally scatter the cremated remains of her husband that have been sitting in a box in her unkept apartment.

The journey to the structure and the climb is duly vlogged by Hunter as they ascend rung-by-rung up an increasingly unstable set of ancient ladders. As they approach the top – and as anyone who has heard anything about the film knows – they end up stranded.

Taking unashamed glee in pressing every vertigo-inducing button available, director Scott Mann (who co-wrote the film with Jonathan Frank) rachets up the tension very effectively, even deploying cheesy close-ups of nuts and bolts shaking loose as the girls head to the top.

Most impressive and enthralling of all is the film’s outstanding cinematography (by Miguel Olaso, aka MacGregor) and the powerful, uncanny sense that our two hapless adventurers are really hundreds of metres above the ground as they scale the tin tower.

As good and as realistic as green-screen technology now is, our eyes are nonetheless able to spot when filmmakers have used the process, whether it’s something huge, like a battle scene, or something small, like the moving background of a scene staged inside a car.

As the girls try signalling for help with their failing mobiles and drone camera, their predicament really looks, well, real.

While we intuitively know that a raft of clever techniques help create the scenario that Becky and Hunter are stuck 600 metres up there’s nothing on screen to break the vivid illusion or draw attention to any fakery.

Kudos to Mann and his crew for pulling off such a marvellous and convincing feat. That it was achieved on a budget so small it wouldn’t cover the catering on a big studio film is all the more astonishing.

It’s serendipitous that Fall should come out at around the same time as the re-release of James Cameron’s 3D epic Avatar; it is the type of adventure film that underscores why 3D has never caught on, despite decade-old claims that it was supposed to herald a new way of making films.

As with films such as Inception, Mission Impossible: Ghost Protocol and, to go way back, The Empire Strikes Back, Fall demonstrates how you don’t need the expensive and cumbersome 3D process to get a convincing 3D effect.

All you need are filmmakers with vision whose sense of daring and adventure match those they put up on the screen for our vicarious enjoyment.

That’s certainly the case with Fall.