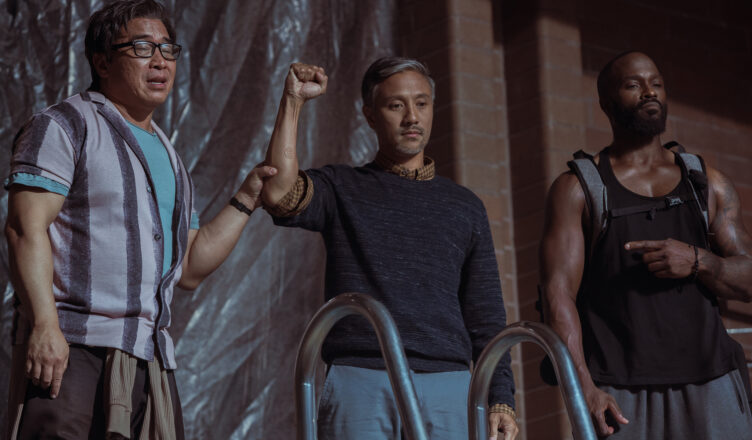 THE PAPER TIGERS *** (107 minutes)
Even casual fans of the Jackie Chan School of Martial Arts Comedy will find copious delight in the high-kicking hi-jinx of Bao Tran’s slick, impressive, value-driven directorial debut, a fun film that delivers reams of quality action along with some nimble human moments.

They were brother warriors under Sifu Cheung’s tutelage but now they’re estranged as they battle with middle age, an affliction that has largely depleted them of the energy and elasticity of youth.

Doubt over the cause of their master’s death leads them on an investigation that involves a good deal of exciting, well-choreographed battles where feet and fists go flying, all to the rhythm of some rather exceptional editing.

The person who said how watching good hand-to-hand combat in a movie was as enthralling as watching ballet knew of what he or she spoketh. Both artforms celebrate the grace of precise movements, the poetry of the human body. The only real difference is that in ballet any loss of teeth, bone integrity, limb function or consciousness is wholly unintentional.

Neatly blended in with all the action in The Paper Tigers is a breezy stream of visual and verbal jokes, most of which play nicely against the machismo that typically goes with big guys and large muscles. In these stakes the trio’s semi-friend Carter (Matthew Page) is especially funny. He’s huge and strong and arrogant, but he also knows his way around the proper preparation and service of tea.

What sets The Paper Tigers apart from most foot-to-the-chin action comedies is the time writer/director Tran gives to developing the domestic life of Danny, who is one flawed individual.

With his defunct marriage just one signature away from complete dissolution he is desperately, ineptly trying to maintain a meaningful connection with his son Ed (Joziah Lagonoy) and soon-to-be ex-wife Caryn (Jae Suh Park), who is clearly the more sensible and responsible of the two, though she does cut Danny more slack than he deserves, chielfy for the sake of their son.

As well as facing down his foes with withered fighting skills baggy trousers, Danny must confront something even more formidable – his qualifications as a good father.

It’s a surprising level of drama for a kung fu comedy and Tran gives these important scenes the time they need to develop so that they don’t feel like last-minute add-ons. The story’s themes of honour and respect flow as naturally through the father-son exchanges as they do when feet go flying into faces. Tran strikes a good balance.

Still, these scenes do munch up a lot of screen time. As for the admittedly lovely fight sequences, well, there sure are a lot of them. Consequently, the film does feel a tad long, but that’s more quibble than criticism.

While the film is clearly inspired by the martial arts films of the 1970s and 1980s stamped out by Bruce Lee, Jackie Chan and the Shaw Brothers (among others, of course) the quality of the direction and Tran’s noble quest to imbue his lark with some real heart keeps The Paper Tigers several notches above the much-loved chop-socky exploitation films of yore, where fighting mattered over feeling.

Tran spent four years writing the screenplay for The Paper Tigers, then – as is ritual for any American independent filmmaker – went about scrounging up the resources and money to make the film. And make it his way.

Speaking from Seattle about the film, Tran explains how his approaches to big studios often resulted in offers of deals, so long as his cast include a bankable actor of their choosing.

It was just one of the many hurdles Tran and his dedicated cast and crew had to clear in making the film happen.