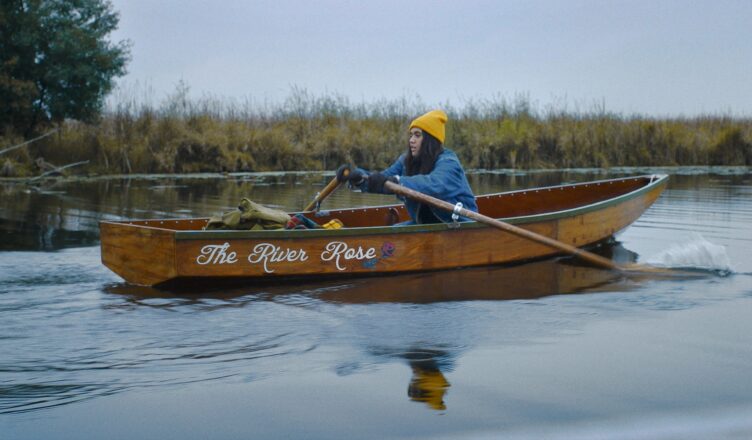 Row, row, Margo: A teenage girl rows up a Michigan river to find her mother in ‘Once Upon a River’.

ONCE UPON A RIVER **1/2 (92 minutes)
If nothing else Once Upon a River offers us a vision of 1970s backwoods America that is starkly at odds with films from the period.

Back then most movies set in remote corners of the country carried the portent of evil. Amidst the deep woods, lazy rivers and still lakes lurked a breed of victim-seeking, dentally challenged psychos armed with guns, axes, chainsaws and such like.

No such threats roam the narrative of Haroula Rose’s feature debut Once Upon a River though, to be honest, there are points in her contemplative, visually moody film where the sagging pace makes you wish somebody of that ilk would pass through. You know, just to liven things up.

Set in 1977 in a small riverside town deep in the verdant heart of tourist-free Michigan is 15-year old Margo (Kenadi DelaCerna), who lives with her single, Native American father Bernard (Tatanka Means).

A worker at the nearby refinery, he is newly dedicated to raising his daughter right, a commitment he signalled when he stopped drinking the day Margo’s white mother Luanne (Lindsay Pulsipher) left their crummy little home to go “find herself”.

Apparently, Luanne had a taste for illicit sex, something she appears to have passed on to Margo. In a very unsettling scene, Margo’s lascivious uncle Cal (Coburn Goss) makes a move on her. Rather than kneeing him in the groin, she responds with matching carnality.

Unsurprisingly, the consequences are dire. Once Margo observes how Cal is preying on young girls she decides to deploy her sharpshooting skills on him while he is relieving himself.

That tense attempt at vigilante justice leads to bad news for her father, leaving Margo with little option but to hit the river in a small row boat on a quest to find her mother, presumably with the hope of reconnecting and providing some stability to her damaged young life.

Fitting neatly into the road movie genre, Once Upon a River offers a reasonably agreeable adolescent drama about a teenager’s need for family, a theme that is dramatically nailed in the firs act.

After a very strong start, however, the film regrettably wilts, chiefly because its meandering pace isn’t matched by character depth or nuance. It’s tough to sustain engagement with Margo, the largely colourless performance by first-timer Kenadi DelaCerna being undercooked rather than understated.

We can forgive Margo’s flaws, but not her lack of emotion in clearly emotional moments.

This blandness accounts for hollow notes at key points in the film, such as when she encounters an attractive student teacher (Ajuawak Kapashesit), then meets eccentric old Smoke (John Ashton). He’s a likeable old curmudgeon who is essentially waiting to die, even after Margo comes along.

Margo’s meeting with her mother feels like an opportunity lost, and what Margo decides to do after finally finding her simply rings false. The dramatic temperature at this critical story point simply feels too low.

Even the river seems too mild. Margo is a brilliant shot with a rifle and a formidable hunter, and there are references to pioneer gun woman Annie Oakley, whose biography Margo is reading. Yet nothing much comes of them. Her skills behind the trigger never really pay off.

The film is directed by Haroula Rose, who also wrote the screenplay, which was based on the best-selling novel by Bonnie Jo Campbell. Rose is a talented short filmmaker and an accomplished singer/songwriter.

Her feature film debut clearly shows potential. The film looks great – kudos to cinematographer Charlotte Hornsby for evocative use of the widescreen frame – and has picked up a swag of about 20 awards on the festival circuit.

Though One Upon a River never really comes together as you hope, it’s certainly a watchable film. It is served very well by its supporting cast, in particular Tatanka Means and veteran John Ashton (Beverly Hills Cop; Midnight Run). ), and Rose does a very good job evoking the netherworld of the half-forgotten folk who live alongside the river in their ramshackle homes and decrepit caravan parks.

The film also deserves plaudits for confronting the vexed issue of abortion. It’s arguable whether the film qualifies as an out-and-out message movie, yet it does raise how the issue involves the lives of a great deal more than two people.