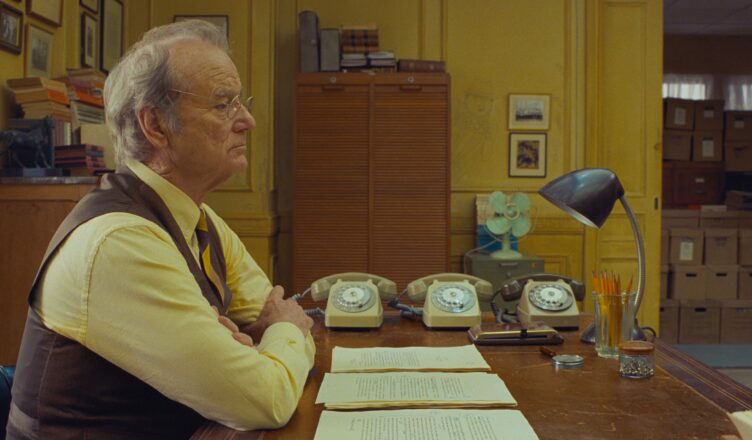 THE FRENCH DISPATCH ** (108 minutes) M
There is so much to admire in the latest hyper-stylized offering from décor-obsessed director Wes Anderson – the highly mannered acting; the exactitude of the framing; the symmetry of the compositions; the beauty of its design – that it’s easy to overlook one important thing: the film has no heart.

Upon the demise of its editor Arthur Howitzer Jr (Bill Murray) the fictitious magazine of the title is to cease operation following the publication of a closing issue republishing several famous articles, the stories of which are recounted.

Of these, the most interesting is the first one involving a prisoner Moses Rosenthaler (Benicio del Toro), an artist who is serving a life sentence for murder. Basing his paintings on his beautiful guard (Léa Seydoux), the works catch the eye of art dealer Julien Cadazio (Adrien Brody) who arranges a major exhibition.

It’s full of quirks and proves fairly amusing. Regrettably, the other stories don’t come close and the film, for all its stylistic posturing, becomes somewhat dull as it lurches on. Not even all the alternating between colour and monochrome can enrich the proceedings.

Anderson – whose long CV includes some pretty good films such as Bottle Rocket, Rushmore and…that’s about it – has never been all that compelled by the storytelling principle of emotionally engaging with an audience. That reputation is furthered here.

The mannered, straight-faced acting – long part of Anderson’s cache of signature ticks – is especially grating, with the stilted dialogue delivery proving the perfect complement to the painterly compositions, which reek with detail but not with life.

Although it boasts a boatload of quirky characters and an impressive ensemble cast – Owen Wilson, Elisabeth Moss, Frances McDormand, Timothée Chalamet (from Dune), Jeffrey Wright, Tilda Swinton, Edward Norton, Willem Dafoe and Henry Winkler (yes, The Fonz) – the performances are largely defined by their dryness. A distinctive kink, to be sure, but also tedious to endure.

Aptly, the fictitious French town in which the film is set is called Ennui-sur-Blasé, which roughly translates as boredom-on-apathy. There’s no argument the film lives up to that name.

Particularly irritating is how The French Dispatch has received wide praise for supposedly being a tribute to journalism. To be brutally honest, it might well be taken as a qualified, nostalgic ode to a very old-school, very specialized form of niche, longform journalism, but it has nothing to say about journalism today. Just clarifying that for the record.

Still, none of this applies to the sizeable fanbase Wes Anderson commands.

These diehard lovers of his work find profundity in his cinematic mannerisms and dismiss criticisms that films such as The Royal Tenenbaums, The Life Aquatic with Steve Zissou, Fantastic Mr. Fox & Isle of Dogs (both truly terrible films) and The Grand Budapest Hotel are examples of form over content.

To these august denizens, The French Dispatch will doubtless unspool as a trove of cinematic splendour far beyond the ability of lesser beings to fully appreciate.